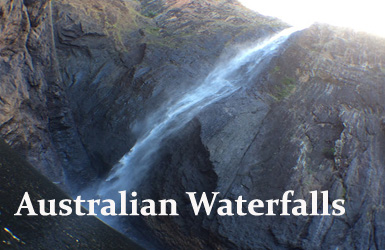 Australia has extensive range of waterfalls and it is too tough to distinguish which is the beautiful waterfall. Even though there are major waterfalls in Australia but the most outstanding waterfall is calculated keeping drop in view. These Australian waterfalls are very impressive cascades, as they have large flow of volumes to gouged deep gorges from mountain ranges that are wet but these have very little catchment areas.

Â Australian waterfalls has amphitheatre like drops due to high number of escarpments surrounding coastline of Australia. This will be one of the reasons for variety of waterfalls that are ranging from high known as horsetail features to cascades and are wide. Also Australia has seasonal rainfalls and which creates an environment for rivers as well as streams which are ephemeral to flow in times of high and extreme rainfalls only.

Here is the List of Australian Waterfalls in all States.Â