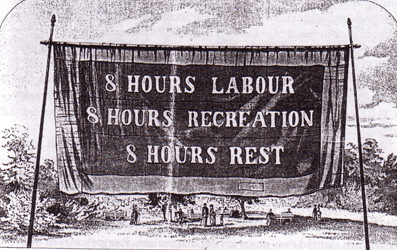 Eight Hours Day is a prominent day for Australians meant to celebrate the achievement of working day limited to eight hours. This day celebrates the workers role in contributing towards the nation’s economy.

The number Eight is observed on many union buildings in Australia which symbolises Eight hours labour, Eight hours recreation and Eight hours rest. Example of such a monument is a golden globe bearing the 888 symbol established in Spring Street in Melbourne in 1903.

When and How Eight Hour Day is Called in Other States?

In Western Australia, it is observed on 4th March 2013 and commonly called as Labour Day

In Tasmania, it is celebrated on 11th March 2013 and known as Labour Day

In Northern territory it is known as May Day.

Till mid to late 1800s, the working conditions in Australia were long and arduous. People used to work up to 12 hours a day and six days a week. Many citizens of Australia demanded the need for Eight Hour Day by marching to the parliament house at the University of Melbourne on April 21 1856. The struggle of limiting the working day and the importance of rest and recreation was coined by the slogan Eight hours labour, Eight hours recreation and Eight hours rest. Later the struggle of Eight hours movement or 40 hour week movement was put to an end which marks the beginning of Eight Hour Day. Several states like New South Wales, Queensland and South Australia started implementing the new eight hour day one after the other.

How do People Celebrate this Day?

As this day is declared as a public holiday by the Australian government, many Australians use this Eight Hour Day as a part of long weekend to spend time with family or friends, relax, watch or play a sport, go to picnics, camping or plan to a getaway trip to coastal regions.