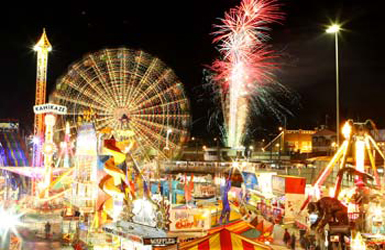 The Royal Queensland Show is Queensland’s leading competition judging event. This annual agricultural event of Queensland, Australia is normally called as the Ekka. The ten-days-long exhibition attracts more than 600, 000 visitors from different corners of Australia and abroad in recent years. Held at the Brisbane Exhibition Ground, the gala receives about 24,000 entries in 20 different categories each year.

The Royal National Agricultural and Industrial Association of Queensland (RNA) appoint nationally and internationally renowned professionals for each competition area to guarantee the highest standard of judging. Though the show continues for ten days, the RNA Show Day falls on second Wednesday of August and that is announced as a public holiday in Brisbane. If there are five Wednesdays in August, the RNA Show Day is celebrated on third Wednesday. Other areas in south-east Queensland also declare one day off to coincide with the RNA Show Day.

The first Royal Queensland Show was held for five days from 22nd to 26th August 1876. Main attraction of the show was the timber exhibition building that accommodated 1,700 individual exhibits.

The event had taken clue from the famous International Exhibitions organized in Britain and many other countries starting from the Crystal Palace Exhibition of 1851. The foremost purpose of the show was to showcase agricultural and industrial products. The event provided a great chance to them who invented new ploughing, sowing and harvesting artifacts. People also used to come to the show with cattle and other farm animals.

Since its inception the show has been cancelled twice only, in 1919 for Spanish flu pandemic as temporary hospitals had been set up in exhibition grounds, and in 1942 because of World War II.

Every year in August, visitors take pleasure of fairground rides, a Side Show Alley, animal parades, wood-chopping competitions, agricultural exhibits, equestrian events, various games and amusement park rides, fashion parades, prize-winning animals, craft and food in the Royal Queensland Show. More than 500 different show bags featuring candy, toys, gadgets, food, and magazines await the visitors in the exhibition ground. They are available in various ranges starting from $1 up to $50 providing manufacturing companies a chance to show off their commodities.

Visitors can also find pavilions specially designed for sheep, pig and poultry, dog and horses in this exhibition. Kids as well as adults enjoy seeing the baby animals in their entire splendor.

As the event witnesses a large attendance it also raises a big amount of revenue touching a $100 million mark. However, because of rain in August, the number of visitors may fluctuate.

Other Holidays in August