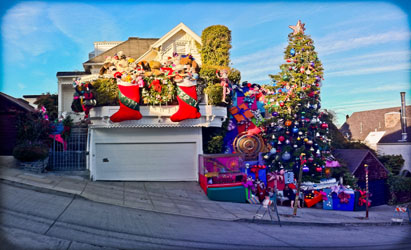 Christmas Day is the celebration of the birth of Lord Jesus Christ on the 25th of December each year. In Australia, as in most countries all over the world, Christmas Day is a public holiday. Generally, Christmas celebrations begin the night before Christmas which is known as Christmas Eve. On this night, Christians attend a church service called Midnight Mass which begins just before midnight and ends just after. Christmas occurs during winter in most countries all over the world but due to its geographic location, Christmas falls during the middle of the summer in Australia as in other countries in the southern hemisphere.

The summer heat slightly changes the way Christmas is celebrated in Australia. Preparation for Christmas begins a few weeks before Christmas with decorations being set up in homes, carol singing, sending out of greeting cards and installation of Christmas trees in homes and public places.

One highlight of Christmas is Santa Claus, a fictional character who is believed to bring presents on Christmas Eve for children who have been good throughout the year. Children hang up empty stockings which are secretly filled with toys and goodies by their parents late at night, only to be discovered by the excited children on Christmas Day. On this day, adults also exchange gifts and greeting cards. Everyone goes to church and on returning, a special Christmas lunch is shared by the family and sometimes close friends.

Songs with Christmas as the main theme are called Christmas carols. There is a tradition of lighting the candles for the Christmas Eve carol service which was initiated by a radio jockey named Norman Banks in 1927 and is continued even to this day. These candlelight carol events are held all over the country and are often televised. Today, there is a considerable collection of Australian Christmas carols.

Several native Australian plants blossom during Christmas like Christmas orchid, Christmas bells and Christmas bush. The first Europeans who arrived in the country were delighted with these flowers which they were able to use as part of their Christmas decorations; a sharp contrast to the bare winter trees that they had left back home in Europe.

Since it is the middle of summer, the practice of serving a fully cooked, hot meal such as roast turkey, chicken, pork or beef has been discontinued. Cold cuts are favored instead, with the accompaniment of a variety of salads. Even the traditional Christmas pudding has been replaced by cold desserts like cold custard or ice cream.

Other Christmas Activities and Events

Special Christmas television programmes are aired for adults and children alike. Children enjoy Christmas story-telling sessions with Christmas stories like T’was the Night before Christmas and Charles Dickens’s A Christmas Carol. There are also some major sporting events like the Melbourne Cricket Match and the Sydney to Hobart Yacht Race.

Other Holidays in December