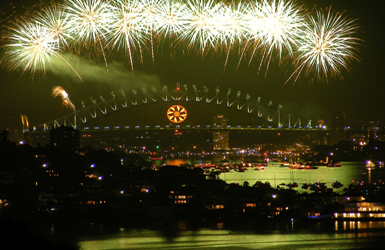 The coming of the New Calendar Year is celebrated by most countries of the world and Australia is no exception. In fact, New Year celebrations in Australia are some of the most extravagant and exciting out of all the other countries in the world. Here we take a look at the way Australia celebrates New Year’s Day. Due to its proximity to the International Date Line, Australia is one of the first countries to celebrate the New Year.

Activities for the New Year

New Year’s Day is a public holiday in Australia. Although several people use this day to recover from the revelry the night before, others take advantage of the holiday to travel to places. As it is summertime when the New Year occurs, the weather is usually fine and suitable for traveling and going for picnics and excursions.

The Perth Cup is another attraction of the New Year. This is a horse race which is run for a length of 3,200 meters and is held at the Ascot Racecourse, Perth. There is a huge amount as prize money which adds up to AUD $4,000.

Public activities also include entertainment in the form of music programs, parades and parties. Celebrities are invited to host or be present at many such occasions. There are several New Year Eve balls organized which are often themed, typically as masquerades, formal wear, pirates, tropical and so on. Needless to say, there is a lot of drinking as people toast the New Year while bidding adieu to the old one.

Several people also celebrate the New Year by going on cruises. These cruises are especially popular in the night time because in addition to the fireworks displays, many light parades and laser shows are held which can be seen best from the various cruise boats that are available at this time.

On New Year’s Eve, all the discos, hotels and clubs are jam-packed with revelers and people also descend on the numerous beaches which dot the area. Several parties go on till the wee hours at private homes. When the hour strikes twelve, church bells are rung and the fog horns of the ships in the harbor are sounded which is the signal for everyone to make lots of noise with horns, trumpets, whistles and drums and wish each other a Happy New Year.

Other Holidays in January